Conciatore is very pleased to present a guest post by Dr. Kate Round in which she acquaints us with the owner operator of the Audnam Glassworks in the mid 1700s.

Sarah Worral Grazebrook 1721-99
by Kate Round

After reading of Sara Vincx who in 1595, following the death of her husband, ran a successful glassmaking business in the City of Antwerp; I was reminded of a local successful businesswoman running a Glasshouse in Audnam, near Amblecote in Stourbridge, when the glass industry was flourishing in the 18th century.

Glassmaking was established in Amblecote after Lorrainer glassmakers arrived in the early 17th century. They were attracted by the best fire clay, cheap coal, sand and soda made from the burnt bracken on Pensnett Chase. De Houx built one of the early glasshouses in 1618 in Amblecote and glasshouses eventually spread over the parish making many and varied products.

Audnam Glasshouse was built in 1716 and was run by Henry Bradley. His business suffered due to the decline in the price paid for broad glass coupled with the introduction of the glass tax in 1745. He finally surrendered his business in 1747 to his landlord, Baron John Ward of Dudley.

Baron Ward immediately let the glasshouse to Michael Grazebrook I at an annual rent of £50. The association between the Dudley family and the Grazebrooks lasted 112years. Business flourished and his son Michael II (born 21st June 1723) learned the trade.


Michael II married Sarah Worral on 16th January 1753, Michael was 29yrs old and Sarah who was an only child and an heiress of Stourton in Staffordshire was aged 31. It was not uncommon for eligible businessman to seek a bride who would bring further prosperity to their allegiance. In 1640 Paul Tyzack, one of the original Huguenot glassmakers to settle in the area was sufficiently integrated into local society to see his son Paul II, marry Joyce Lyddiatt the daughter of his landlord, John Lyddiatt a scythesmith of Wollaston Hall. Joshua Henzey son of Huguenot Ananias Henzey, arrived in Stourbridge in 1618 aged just 22years, he wasted no time in marrying Joan Brettle a spinster from a substantial landowning family. Just six days after their marriage Joan gave birth to their son Ananias, baptised in Kingswinford on 5th October 1618.

The marriage between Michael Grazebrook II and Sarah Worral lasted just 15 years. Michael died in 1766 aged 42years. They had two sons, Thomas Worral Grazebrook (11/08/1756) and Michael Grazebrook III (7/03/1758). In Michael II’s will he was described as a master glassmaker and desired that trade be carried on by his widow Sarah and that stock in trade, book debts, personal estate and effects be equally divided between his only two sons, Thomas and Michael III aged 10years and 8years at the time of their fathers death.

In 1760 Audnam Flint Glasshouse was listed as manufacturing Smooth Enamel Glass, Best and Ordinary Flint Glass and Phials. Sarah Grazebrook continued to manage her late husband’s glassmaking business for many years and although both of her sons were involved, they also developed other interests in coal and ironmaking.

In 1783 Sarah was listed as a Glass manufacturer in a local directory and in that year also she took out a further 21-year lease from the landlord Lord Dudley. Her lease was in the sum of £52 per annum with maintenance and repairs to be undertaken by the lessee at her own cost. Sarah also took out an insurance policy in both her and her sons names on 5 May 1783. In 1793 a local directory stated that about ten glasshouses in the district had an output so great that they each paid £20,000 per annum in duty (equivalent to £2.8m today). T&M Grazebrook was one of those listed.

Michael III married in 1785 and moved to the family home Audnam House attached to the glassworks. After his marriage both Michael and his brother Thomas took over the running of the business from their mother Sarah. Their business continued to prosper in glass, coal and as ironmasters; the eight-pot glassmaking furnace traded as T & M Grazebrook, yet in 1795 it was Sarah who paid the £53 rent to Lord Dudley. Their mother remained the head of the firm until she died in 1799 aged 78y. Her will divided her estate between her two sons Thomas and Michael III.

For nineteen years, between the death of her husband in 1766 and when her sons were registered as the business owners in 1785, Sarah maintained the business. She was solely responsible for the day to day running of the eight-pot Audnam furnace and a bottle making furnace at Dob Hill. She managed the workforce, maintained healthy order books, purchased raw materials and supplied quality products; thus ensuring a flourishing business to pass on to her sons. Tradition tells that as an old lady Sarah would sit in her bedroom window with an hourglass to time her workmen’s shifts.

Like Sara Vincx in Antwerp in 1595, running successful glassmaking businesses in a male dominated environment must have bought many challenges that went unrecorded. Did Sara marry Filippo Gridolfi, one of her foremen of the furnace, to validate her position. Did both formidable ladies contribute also to product design, were they hands-on with blowing irons despite the taboo of women working glass? Who knows! some things perhaps were best left unsaid? 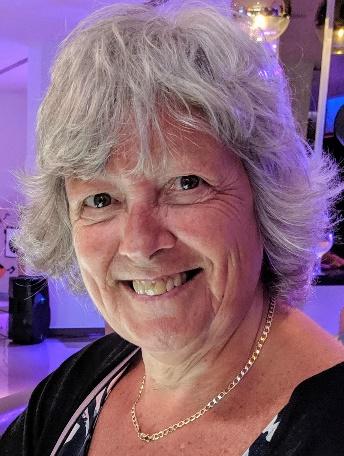 Dr Kate Round is an outreach presenter and tour guide for Dudley Museum Service, based at the iconic Red House Glass Cone in Wordsley; the home of Stuart Crystal.

In her previous life, she was a research chemist and lecturer so understands the chemistry of glass having worked on the synthesis of ‘zeolites’ (silica-based materials) with her work published in International Journals. "I have always lived in the Black Country and have a strong industrial family heritage; I am also proud to have served my community as a local Magistrate for the past nineteen years. In the glass industry, my areas of interest include the historical development of the industry in the Stourbridge district, how the geology and geography impacted on the wealth and sociology of the area, driven by the rivalry of our Glass Dynasties."