Creative Use of Mirrors 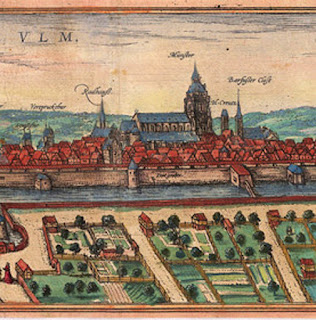 Along the banks of the Danube River in southern Germany lies the ancient city of Ulm. Besides being the birthplace of Albert Einstein, at the start of the Protestant Reformation in the sixteenth century, Ulm was near the epicenter of the bloody Peasant’s Revolt.

In the spring and summer of 1525, peasants and farmers throughout German speaking Europe staged a popular revolt now called the Deutscher Bauernkrieg. [1] At the heart of the matter was an oppressive system of taxation run by the Catholic Church, in which little or none of the revenue was used to improve life locally. Often, action was lead by Protestant clergy, but to little effect against the mercenary armies hired by the aristocracy. It was a very brutal affair; in the end, up to 100,000 of the poorly armed and organized peasants were slaughtered.

This brings us to a curious story of retribution oddly reminiscent of the ancient legend of Archimedes' burning mirror.  Through this account, we can trace the migration of a technical recipe from Ulm over the alps to Venice, then to Sienna and finally to Florence. The recipe is for the metal alloy to make mirrors, and it is told from one friend to another while chatting amiably in Venice, years after the revolt.


Among other things, he said that he had made one [concave mirror] almost half a braccio across [about 13 inches], which extended the clear rays of its brightness more than a quarter of a German league when he caught the sun with it. One day, when for amusement he was standing in a window to watch a review of armed men in the city of Ulm, he bore with the sphere of his mirror for a quarter of an hour on the back of the shoulder armor of one of those soldiers. This not only caused so much heat that it became almost unbearable to the soldier, but it inflamed so that it kindled his jacket  underneath and burned it for him, cooking his flesh to his very great torment. Since he did not understand who caused this, he said that God had miraculously sent that fire on him for his great sins. [2]

The story was told to Vannoccio Biringuccio, who recalls it in 1540 in his Pirotechnia, the first printed book devoted to metallurgy. Specifically, the recipe is a variant of what today we would call white bronze, which as Biringuccio states is similar to the metal used to cast bells. He recites ancient formulations that used three parts copper and one part tin. To this was added 1/18th part of antimony and optionally 1/24th part of fine silver to give it a neutral color. Indeed, other ancient formulations for what was known as speculum metal specify a 3:1 ratio of copper to tin. He continues,


But nowadays most of the masters who make them take three parts of tin and one of copper, and melt these together. When they are melted, for every pound of this material, they throw in one ounce of tartar and half an ounce of powdered arsenic, and let them fume and melt and incorporate well.

Biringuccio’s version reverses the copper and tin ratio from the classical composition. Compare it with Antonio Neri’s prescription which appears half a century later, it is almost identical:


Have 3 lbs of well-purified tin, and 1 lb of copper also purified. Melt these two metals, first the copper, then the tin. When they fuse thoroughly, throw onto them 6 oz of just singed red wine tartar, and 1½ oz of saltpeter, then ¼ oz of alum, and 2 oz of arsenic. Leave these all to vaporize, and then cast [the metal] into the form of a sphere. You will have good material, which when you burnish and polish, will look most fine. This mixture is called acciaio and is used to make spherical mirrors.

To be clear, the tartar, saltpeter and alum act as a surface flux - they form a layer that floats on the liquid metal, preventing oxides from forming, which can foul the melt.  their addition does not change the base alloy composition.

The similarity of the two recipes alone is not enough to draw any conclusions. Biringuccio himself reports that the contemporary artisans favored the tin rich formulation. However, there are other details to consider. The Sienese born Biringuccio was something of a hero in Florence where alchemist Antonio Neri was raised. The famous metallurgist helped cast cannons, mortars and guns for the Florentines to defend themselves in the late 1520s, when the city was under siege, just a few years after Biringuccio’s conversation in Venice with his German Friend from Ulm.

Neri was definitely familiar with Biringuccio’s book Pirotechnia. In fact, the introduction to Neri’s own book on glassmaking,  L’Arte Vetraria, is patterned after the metallurgist’s survey of glassmaking.  In his chapter 14, book 2 Biringuccio wrote:


… it [glass] is one of the effects and real fruits of the art of fire, because every product found in the interior of the earth is either stone, metal, or one of the semi-minerals.  Glass is seen to resemble all of them, although in all respects it depends on art. [3]

And here is the opening to Neri’s introduction a half century later in 1612,


Without a doubt, glass is a true fruit of the art of fire, as it can so closely resemble all kinds of rocks and minerals, yet it is a compound, and made by art. [4]

Both passages go on to cover much of the same ground, albeit with a change in focus reflective of new thinking about chemistry and nature. In one sense, Neri is paying homage to his distinguished predecessor, and there can be little doubt that he read Biringuccio’s book and its technical recipes closely.

In the years leading to the publication of Neri’s book, he left his home in Florence and traveled to visit a friend in Antwerp. If he had read the book on metallurgy early, perhaps as part of his education, then he was already familiar with the mirror alloy recipe. If he followed the route suggested by his friend, he would have taken the recipe back to Venice, and then over the Alps and likely through Ulm on his way north to the Low Countries, where he would spend the next seven years before returning to Italy. [5]

[5] Special thanks to Jamie Hall (@PrimitiveMethod) for inspiring this post.
Posted by Paul Engle at 12:00 AM