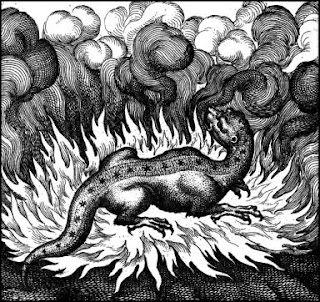 I first wrote the following post last year on 19 August. Since recent discussion has included the goblins of the Saxon zaffer mines, it seems timely to take another look at the glassmaker's salamander. Glass work has always been a hot, sweaty, exhausting affair. It is not surprising that after a long day's labor one might honestly think they saw small animals scampering around in the fire. The legend, however, is an ancient one; Aristotle, in his History of Animals reported that salamanders were thought to possess the ability to put out fire with their bodies. They became part of the lore among glassmakers in Venice on Murano and were even spotted in Antonio Neri's Florence. Here is the original post:

If one can say that hot-glass workers have a mascot, it is without any doubt the salamander. Since ancient times, this lizard-like, poisonous skinned amphibian was ascribed to exist within fire, even to be born out of the flames. According to legend, its cold body allowed it to survive the heat. To see one in the flames of a furnace was considered good luck, but glassblowers who suddenly disappeared (to work elsewhere) were said to have been "eaten by the salamander." In his autobiography (1558-1567), Florentine artist Benvenuto Cellini offers this recollection:


When I was about five years old my father happened to be in a basement-chamber of our house, where they had been washing, and where a good fire of oak-logs was still burning; he had a viol in his hand, and was playing and singing alone beside the fire. The weather was very cold. Happening to look into the fire, he spied in the middle of those most burning flames a little creature like a lizard, which was sporting in the core of the intensest coals. Becoming instantly aware of what the thing was, he had my sister and me called, and pointing it out to us children, gave me a great box on the ears, which caused me to howl and weep with all my might. Then he pacified me good-humouredly, and spoke as follows: 'My dear little boy, I am not striking you for any wrong that you have done, but only to make you remember that that lizard which you see in the fire is a salamander, a creature which has never been seen before by anyone of whom we have credible information.' So saying he kissed me and gave me some pieces of money.